We told you Drag Week was crazy—here’s how crazy: take a former 8-second 1968 Camaro. Install this billet aluminum, 5-inch bore spacing, semi-hemi-headed monster motor (that has never seen street duty), and see how it will stand up to Drag Week 2015 brutality.

Doc McEntire and helper Jeff McConnel are veterans of Drag Week, and kinda nuts. They’re willing to challenge everything they know about engines combos and drag racing and sacrifice themselves for a Drag Week experiment project. They’ve installed this Todd Goodwin-designed billet aluminum semi-hemi headed engine built for extreme offshore marine and truck pull applications, in McEntire’s 1968 Camaro. Their goal is to see what the competition-only mountaim motor will do driven on the highways and byways of the Midwest.

The engine and heads are cut from chunks of billet aluminum. The 5-inch bore spacing cylinders and semi-hemispherical-combustion-chamber heads resemble Pro Stock Chrysler Hemi heads, but aren’t. The only OEM 5-inch-bore-center V8 engines that come to mind are Packard’s engine from the 1950s and Cadillac’s 472 and 500ci engines. If you would like to see one of these Goodwin “semi-Hemi” engines in a tractor pull check this out:

Water jackets are cut into the sides and interior of the block. The EFI uses two MS3 Pro Megasquirt ECUs, compression is a secret, as are any cam questions, other than it’s a nine-journal 70mm cam. Timing is set at 31-degrees, but that’s variable based on accumulating computer data. The engine will spin at over 8000 RPM. Trans is a two-speed Powerglide.

Check out this video of one of these hairy Hemis on the dyno.

The thing is that Messer’s McEntire and McConnel had no passes on Doc’s Camaro with this engine until Sunday’s Test ‘n Tune, where their SHAKEDOWN pass was a 10.16-seconds at 164.37mph! On Day 1 of Drag Week, they made a single pass of 8.730 at 168.51, and then headed to Indianapolis Raceway Park where Day 2 of Drag Week takes place.

Day 2 Morning Update: Our intrepid Hemi travelers are in the Indy pits and getting ready to run, but not before more drama last night driving from Gateway to Indianapolis Raceway Park. Overheating was a big issue, but the issue was in the Megasquirt programming–but not in a bad way. The program is set up to cut electric fans at 40 mph with the assumption that once you’re cruising at 40 in your street machine you don’t need the fans. True, but this is an insane 1450 hp 670ci mega monster motor, not a 550hp Camaro. On the road they contacted MS3, makers of the Megasquirt system, and their tech guys helped McConnel change the fan shutoff on his computer while McEntire drove on. With the electric fans now on most of the time, and with McConnel pulling fuel out of the engine as they continued to drive and monitor the engine functions, they were able to increase their cruising to almost 70mph, getting close to 10 mpg, pulling into their Indy hotel a bit past 3:00 AM. Now let’s see how they run! 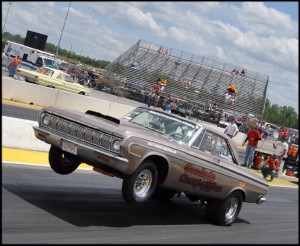 Douglas Motorsports made modifications to the chassis, and moved coolers and other components lower in the truck to improve handling. The major changes, however, were the addition of a Goodwin Competition Racing Engine with a Borla Performance Exhaust system and a manual transmission. “The truck is dramatically different to drive than it was last season. This engine builds power so quickly, that I found myself short shifting at certain points on the track to keep it hooked up. I think we’ll really see an improvementwhen we get to the natural terrain high-speed tracks like Bark River and Crandon.”